Note: The views and opinions expressed in this article are those of the authors and do not necessarily reflect any agency's official policy or position. The articles are for informational purposes only, share your opinions about Best 224 Valkyrie Upper in the comments and join the discussions. Let's share 💬 our ammo & gun experiences together!

.224 Valkyrie is a predator hunting cartridge, which can fit an AR-15 magazine properly.

.224 Valkyrie rounds enhance the AR-15 platform potential, featuring long-range performance similar to larger calibers (the 6.5 Creedmoor shot from AR-10). To reach maximum results these bullets should be shot through a good barrel. .224 Valkyrie bullets significantly made trajectories and ballistics better over other AR-15 calibers (5.56x45mm NATO or 6.5 Grendel).

Why do we need 224 Valkyrie upper?

To provide reliable functioning in an AR-15 chambered for 5.56, you need to replace the entire upper receiver (or just barrel and the bolt carrier groups), using an existing lower receiver.

.224 Valkyrie ensures a similar kick to those other AR-15 rounds, but the same qualities to a larger round like the .308, with only half of its recoil. Practically, AR-15 converts to more ballistically similar to a 6mm AR-10. .224 Valkyrie rounds can be super-sonic at long ranges as well. 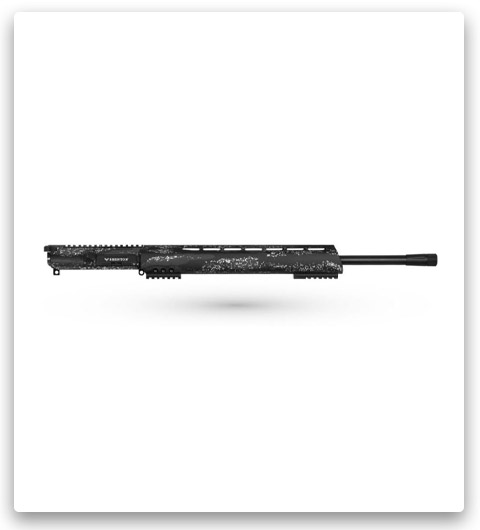 This Forged HuntPort upper is completed with BCG with Nickle Boron Coating and HuntSize Charge Handle. The used materials (Stainless Steel (416R) and Carbon Fiber), as well as manufacturing processes, are proven by HuntSpec. 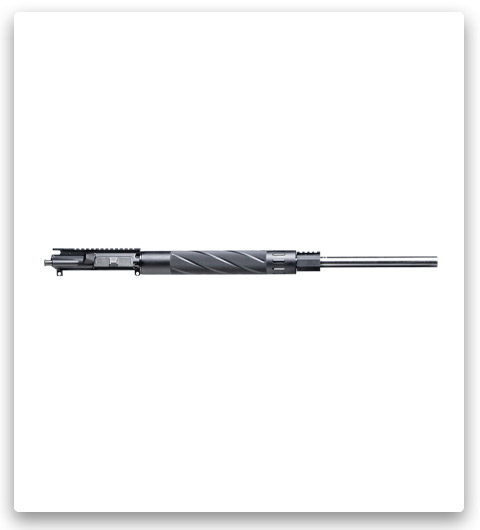 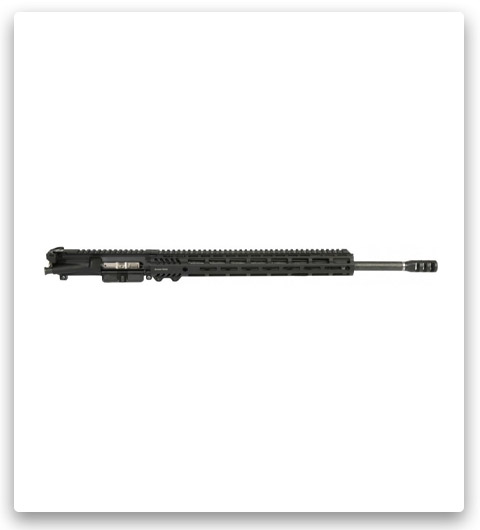 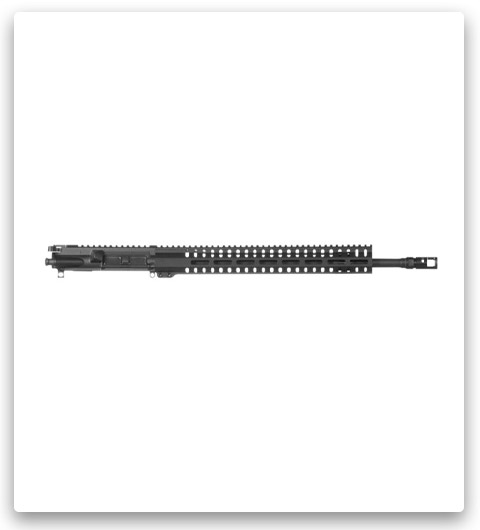 The CMMG ensures that ENDEAVOR upper builts will enhance long-distance marksmanship while hunting or target shooting. From five CMMG Upper models for Endeavor 200, one is bored for .224 Valkyrie. This group with 1-7 in Twist integrates Medium Taper Profile barrel, 15-in Handguard, SV Muzzle Brake (threaded 1/2-28), and high-performance trigger to improve accuracy. The upper is finished with Black Matte. 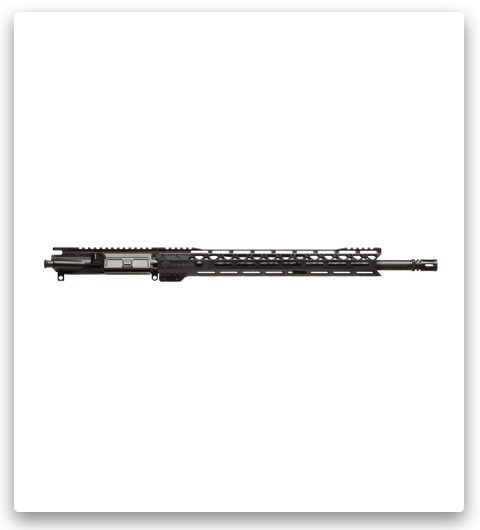 Pros
Cons
Buy Online
DoubleStar sells only the charger handle separately without bolt: this upper comes without BCG and handle, but still, they indicate “Complete upper”, although it’s an incomplete one. 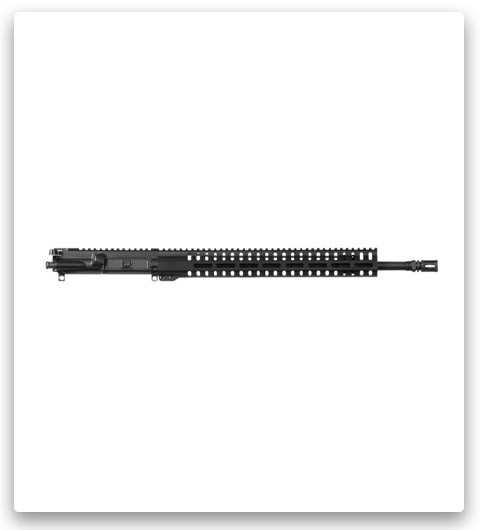 Among five CMMG Upper models, there is one, which is designed for .224 Valkyrie for Endeavor 100. This group with 1-7 in Twist features a 15-in Handguard, Medium Taper Profile barrel, A2 Muzzle Comp (threaded 1/2-28), and effective trigger to increase precision. The upper is covered with Anodized. The CMMG ENDEAVOR uppers provide enhanced long-distance accuracy while hunting or target shooting. 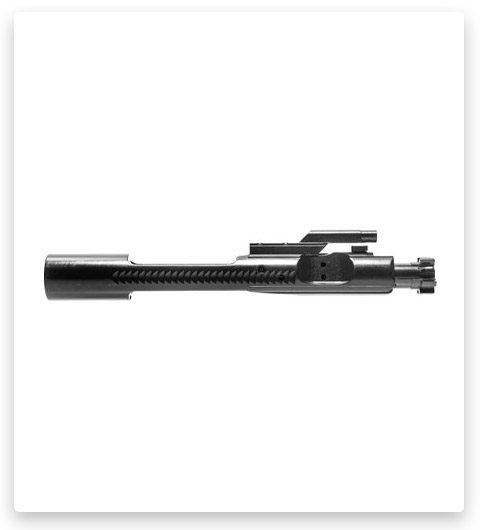 One of five CMMG Upper receiver models is bored for .224 Valkyrie for Endeavor 300. This upper comes with a Medium Taper Profile barrel with 1-7 in Twist, SV Muzzle Brake (threaded 1/2-28), 15-in Handguard, and functional trigger for enhanced accuracy. The upper receiver is covered with Black Matte. The CMMG ENDEAVOR 300 uppers allow to improve long-distance marksmanship while target shooting and hunting.

For the stripped upper receiver, the instructions are the following:

What is the best barrel length for 224 Valkyrie?
Usually, the quality of bullet velocity and accuracy depend on the rifle barrel length: the longer barrel, the better performance. Using a .224 Valkyrie with AR-15 rifle, a twenty-inch barrel length will be the best for precision shooting and hunting at long ranges. An 18-inch barrel is more appropriate for short-range hunting or home defense.
How far can a 224 Valkyrie shoot?
224 Valkyrie is good for long-distance hunting, ensuring great power and accuracy at over 1,000 yards.
What is the difference between 223 and 224 Valkyrie?
Featuring the same bullet diameter, and a similar case length, the main difference is the rim diameter. .224 has larger shoulders and a wider body than the .223 Remington. The bullet weight is 60-90 Grain for 224 Valkyrie, and 35-80 Grain for 223 Remington.
Will a 224 Valkyrie kill a deer?
The .224 Valkyrie cartridge is viable for hunting on antelopes and deer. The 90-grain Fusion round at 2,700 fps has the necessary target load. The 60-grain Nosler Ballistic Tip Varmint bullet at 3,300 fps features a good load for hunters. These fast-expanding rounds promptly attack the hunting game with enormous amounts of energy.

The .224 Valkyrie can beat the 5.56x45mm NATO or the .223 Remington cartridges, as it’s a heavier bullet, which shoots faster than the 5.56, and it can be used for precision shooting on targets about 1200 yards. Consider these factors while looking for a new .224 Valkyrie upper for AR-15: barrel length, durability, Twist Rate, and Ease of installation. The sturdier the barrel is, the longer it lasts and the better it serves. Rust and corrosion-resistant barrel finish is a more advisable feature.

To choose the due twist rate, follow the rule: the heavier rounds, the less barrel twist should be. For an average .224 Valkyrie bullet weight (63 grains), 1:7 is a suitable twist rate ratio (the 1:7 means the round receives seven inches to complete one rotation).