Authors: Each article is verified by AmmoCave's expert team. Professional hunters and gun experts write the articles. AmmoCave Team independently researches, tests, reviews, and uses recommendations from our community of gun owners. We may earn commissions from shopping links.

Note: The views and opinions expressed in this article are those of the authors and do not necessarily reflect any agency's official policy or position. The articles are for informational purposes only, share your opinions about Best AK Trigger in the comments and join the discussions. Let's share 💬 our ammo & gun experiences together!

A Kalashnikov gas-operated rifle is known as a firearm with an iron sight, which is less accurate than the American M16. These assault AK firearms are not so easy to shoot and shooters will need to get used to them. AK-74 is an AK-47 version with an upgraded design.

AK-74 is more reliable and precise than AK-47, but the second Kalashnikov is twice powerful, so it is more appropriate for real combat. Though both AKs can be used for field and urban areas.

Why do we need an AK trigger?

AK-type firearms are less popular than ARs in the USA. Although there are many fans of AK-74 (5.45×39 mm) or AK-47 (7.62×39 mm cartridges). Trigger upgrading allows for improving AK-shooting accuracy. A new AK trigger will deliver a safe position, short crisp reset, light pull, good general performance, and quicker shooting rate in combat, competition, training, or plinking on the range. 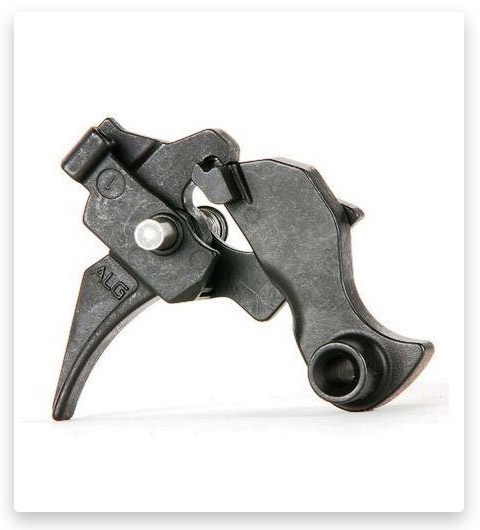 The single-stage trigger with a rivet for most AKs operates without fitting, delivering continual 3 lbs-pulling and short reset. 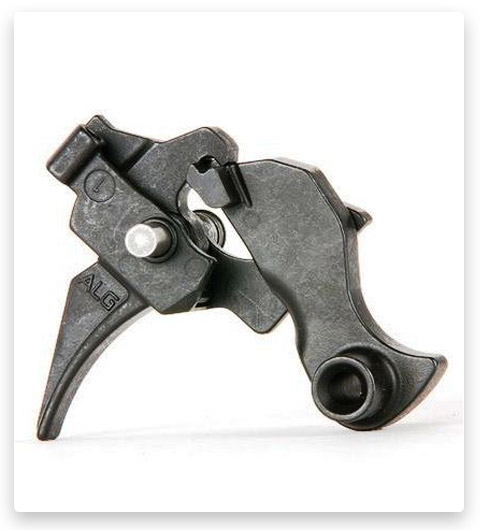 AK 47 and 74 triggers are appropriate for home defense and combat usage. The single-stage trigger features drop-in mounting and replacement type. The trigger with corrosion-resistant coating doesn’t slop when the safety is engaged. The proprietary Lightning Bowl provides fine-drawn trigger handling and feel.

These triggers come with a rivet (not bigger than 0.062 inches tall) for the trigger guard rear to make an anti-slip function. Higher rivets, than admitted ones, can reduce necessary clearance, and result in disconnector damage. It is recommended to shave down the rivet, not the disconnector tail, to avoid trigger slap.

ALG Defense designed single-stage triggers for most AKs to work without fitting. A qualified gunsmith mounting and making all shooting control groups fitting is necessary for proper trigger operation. 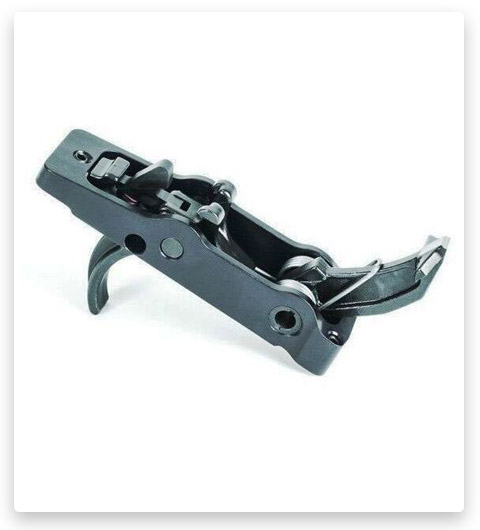 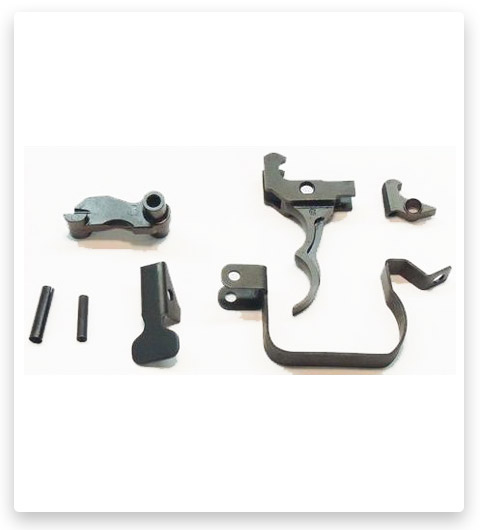 Century developed the double trigger kit that is appropriate for AK buildings, allowing a quicker fire rate with better control. The trigger guard should be continually upgraded to handle the extra-length trigger. The tactical replacement trigger is manufactured of steel with a black coating. It is recommended for shooters, who are unfamiliar with AK, to use gunsmith assistance during the trigger installation.

AK 47 and 74 triggers are appropriate for home defense and combat usage. The ALG triggers are crafted from S7 Tool Steel (machined triple alloy) with Manganese Phosphate coating in black color. The single-stage trigger features drop-in mounting and replacement type. ALG triggers are smoother and shorter; they come without springs, which are compatible with rifle models AK-47 and AK-74.

Sometimes it is necessary to notch the disconnect or make some fitting for the hammer. It can take some time or you can use a gunsmith’s help. AGL offers grinding or chamfering the rivet; it’s possible to cut the tail off the disconnector end to prevent the issues with double fires from hammer slap. After installing the extra spring, the trigger pull becomes a little heavier like a comp trigger. 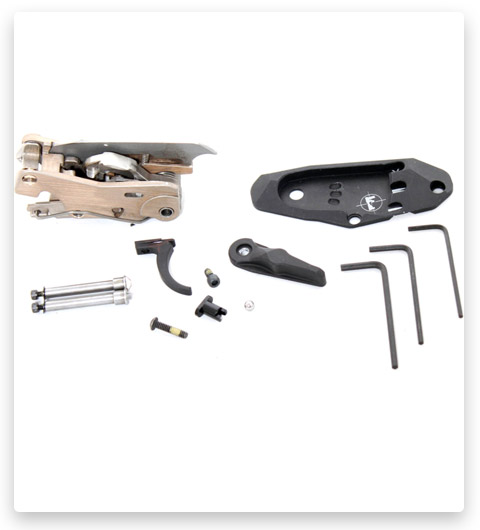 The Echo AK-47 drop-in trigger is manufactured for the common stamped models. These triggers will work well for rifles with a full auto-bolt carrier. Milled AKs can work even with the mode selector plate and the trigger blade, if necessary.

FosTech designed three modes of operation Safe Echo semi-automatic triggers that integrate the Echo AR-II features (the same patented trigger lock technology) to be mounted on the AK-47 rifle platforms. There are 3 different settings to select: in Safe Mode, a rifle will not shoot; in Semi-Automatic Mode a firearm will fire after pulling the trigger; Echo Mode allows shooters to fire a bullet both on the pull and on the release of the trigger.

To solve issues with trigger pull, grind down some trigger back wall of the guard and carefully Dremel some of the back ends of the trigger blade as well to make it clear while pulling. It is recommended to check the local and state laws before ordering the trigger. 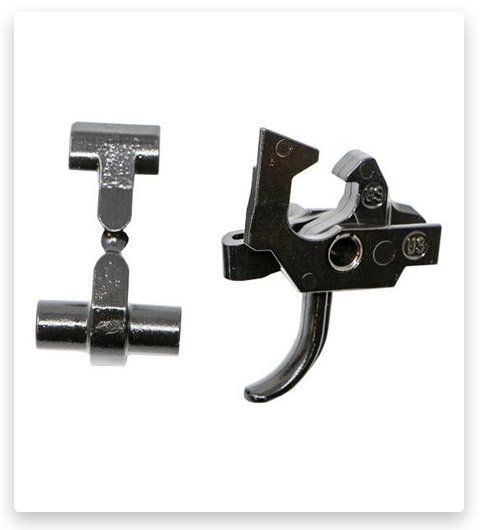 The semi-auto mil-spec triggers consist of a hammer, stopper, disconnector with spring, and sleeve. The double-stage triggers are completely assembled, featuring a drop-in construction for AK/RPK based rifles with milled or stamped receivers. The single-hook trigger is manufactured from the hardening steel (Alloy Steel), covered with a protective Black oxide. The front side of the disconnector is fully contracted with the hammer, providing a secure lockup. Fime Group ensures the long-lasting and dependable operation of this trigger.

The Binary Firing System GEN 3 (BFSIII) allows excluding the release bullet just by moving the Patent Pending selector out of Binary mode, holding the trigger back. The BFSIII AK-C1 Triggers function in three positions, where the first one is for safety, which means no fire; the second position is for semi-fires (one bullet per pull); the third one is for binary fires (one round on pull and one another on release).

The third position provides the trigger to be the fastest semi-automatic one at the ammunition market, appropriate for tactical, competition, and recreational application. There are two trigger models, depending on the used caliber: 7.62×39 mm and 9 mm.

This trigger is not compatible with IWI Galil Ace; apparently, it will need significant modification to the trigger housing and the rifle, as well as a professional installation to operate with VEPR 12 7.62×39 with the 1.5 mm receiver.

Why upgrade the AK 47 trigger?
The modernization of the AK trigger allows enhanced firing accuracy. Therefore it is expedient to install a better trigger without high costs.
What is the standard trigger pull on an AK 47?
Kalashnikov rifles shoot 7.62 x 39 rounds, with 6.9 ft-lbs recoils. The AK-47 trigger pull is comparatively light, as the pull length from engagement to shooting is long enough, ensuring necessary control. The weight of an average trigger pull is approximately 3 lbs 3 oz with the spread (from 3/0 to 4/1).
Why are AK 74 triggers so expensive?
Because AK74 isn’t widely used in the USA. Most American shooters prefer the firearms, such as AR15 rifles, which fire smaller military-caliber bullets, but faster ones.

So, apart from assembly and components, low demand and distribution influence the AK price.

How does AK trigger work?
The triggers for AK rifles consist of a built-in disconnector and sear hooks. These triggers are two-stage small units, releasing a spring (or catch) to set off a firing mechanism. After trigger releases for the shot, the key idea of its operation is to pivot, making the disconnector turn out, pushing the hammer to drop onto the trigger sear hooks.

AK-47 is widely used in the world, but it is not so well-spread in the USA. If you want to upgrade the trigger for AKs, it won’t be cheap, but you’ll get the rifle with better performance. A new trigger will significantly upgrade any AK-style rifle, enhancing the performance of reset, pulling, lock time, and ensuring safety (while holding the trigger), whereas retaining the traditional reliability of a stock trigger.

There are a few different types of triggers that you may encounter while shopping for a gun. Here is a quick overview of the most popular types:

There are a few different types of triggers that you may encounter while shopping for a gun. Here is a quick overview of the most popular types:

☑️ Single-Stage Trigger has only one stage of pull, meaning that the trigger must be pulled all the way back in order to fire the gun. This type of trigger is typically found on hunting rifles and is preferred by many target shooters.

☑️ Two-Stage Trigger has two stages of pull, a light first stage followed by a heavier second stage. This type of trigger is often found on competition rifles and can help prevent accidental discharges.

☑️ Adjustable Trigger allows the shooter to adjust the amount of force required to pull the trigger. This can be handy for shooters who want to customize the feel of their trigger.

☑️ Hair Trigger is a very light and sensitive trigger that can be set to fire with just a slight touch. This type of trigger is typically found on competition pistols and can be dangerous if not used carefully.

☑️ Binary Trigger is a type of trigger that allows the gun to be fired in either semi-automatic or fully-automatic mode. This can be a handy feature for shooters who want the flexibility of both modes, but it can also be dangerous if not used properly.

AmmoCave offers a wide variety of weapon triggers and accessories to fit your needs. Our knowledgeable staff is always ready to help, so don’t hesitate to ask if you have any questions.